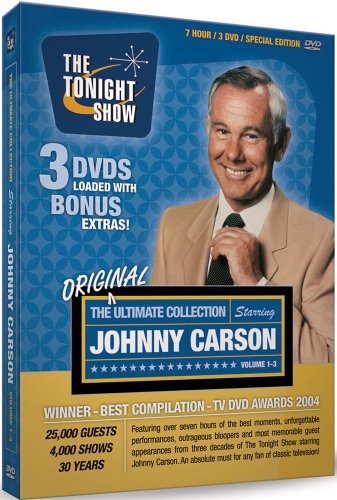 Heeere's Johnny . . . in his favorite moments from four decades of the Tonight Show, selected by the King of Late Night himself. Includes Carson classics like Carnac and Aunt Blabby, monologue jokes, couch time with Ed McMahon, and performances by Dean Martin, David Letterman, and Robin Williams, among others. Includes the emotional final show and hilarious Animal Hijinks. Color and black & white, 4 hours 28 min. on 3 DVDs. .com ---- Culled from 30 years of material, this collection of moments from The Tonight Show Starring Johnny Carson contains some of most inspired bits of lunacy ever recorded. Whether cajoling with Hollywood's biggest stars or normal folk with special talents, Carson was a master of finding the right joke, with timing second to none. Along with bits of his opening monologues, skits, and early standup appearances from the likes of David Letterman and Eddie Murphy, there are many highlights with perhaps the perfect Carson guest--exotic animals that stole the show. This collection was released shortly after Carson's reign ended in 1992. Although most of the tapes from his first decade are lost, there are plenty of highlights from the '70s through the '90s. Also included is Carson's touching and historic "Final Show," which finds the host simply talking to his audience and showing highlights--or just the faces--from his years on the set. Although many followed--and a few have even succeeded--Carson's Midwest charm made him the king of TV in a period when America was defined by television. The DVD edition adds some superlative extras, including "Danger Johnny" segments from his first decade, short bits on the history of the show and the host, and more behind-the-scenes glances, including an intriguing way to watch the final show via unedited feeds from isolated studio cameras. Also included is the 1982 NBC special "Johnny Goes Home," which follows Carson on a tour of his rural Nebraska homeland, and a slightly edited version of the penultimate show, in which his last two guests, Robin Williams and Bette Midler, are on fire. These extras make the DVD, produced a decade after Carson left, a must-have piece of entertainment and pop history. --Doug Thomas
Show More
Reviews